Who was first Keith or Harry? A Rolling Stone fashion dilemma 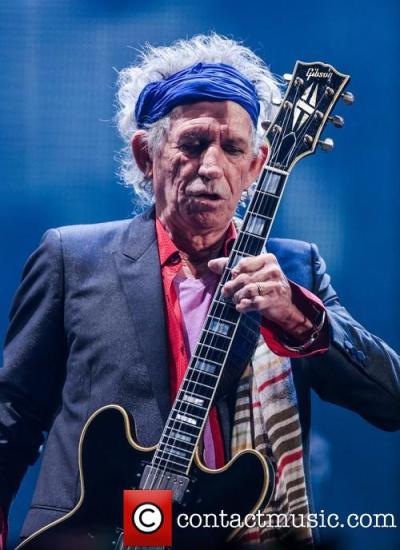 Last week the Rolling Stones played an historical gig at Hyde Park, London, having not played there since 1969. It was of those rare but amazing London evenings of warm temperatures when the sun doesn’t set until 10:30 pm. Those geriatric rockers, as Dan likes to refer to his adult obsession, had so much punch for their age (mostly 70 years old) they were an inspiration to watch. Throughout the gig, which we were privileged to attend on the last night of our overseas holiday, my focus was constantly on Keith Richards’s bandana. Electric blue, it looked identical to Harry’s headband. Not only that but Keith also sported a full head of unruly curly locks tucked behind it.  I also found myself concentrating subconsciously on the vibrations of the music- almost putting myself in Harry’s shoes as if he had been with us at the concert?

So we are finally home after a month visiting family and friends in the UK and a week to get over that in France. Harry turned 2 the week before we left and there was no doubt we were traveling with a regular two-year-old boy. Antics of climbing out of his cot before he fell asleep at night, pulling out Grandma and Grandpa Finchley’s TV satellite antenna, leaving them for days wondering why they had no TV picture, were but a few of the things he got up to. He met many new faces and I think I could safely say on their behalf that many would not have known he was deaf if they hadn’t previously known. 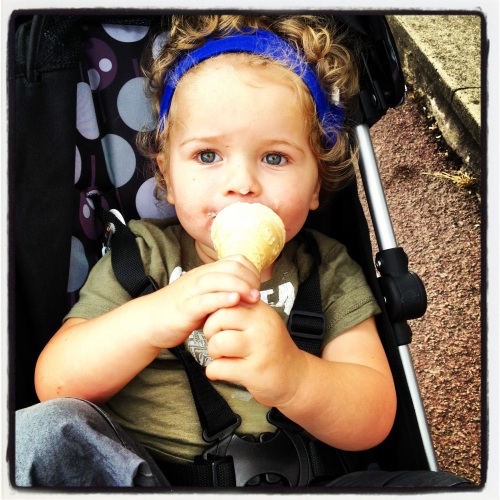 Spending that much time with all of us not working was ideally a time for Harry to increase his vocab and absorb all the new sights and sounds of a city with over double the population of Melbourne. According to Alice, one day she counted 55 siren sounds on our outing- that’s a lot of crime and accidents in one day- but that is London. Busy, fast, crowded, noisy and full of different smells. I wouldn’t doubt that just taking all that in everyday was more than enough for a two year olds senses to cope with especially a boy obsessed with trains and vehicles. Given a few more years on him, I have no doubt Harry will be exactly like Alice who started mimicking the announcements on the Northern Line tube…. “The next station is Hampstead, Swiss Cottage, Finchley Rd….so please mind the gap between the train and the platform… Stand clear closing doors” etc. Harry is not quite there yet but who knows if it is all stored away in his little mind waiting for an opportunity to jump out.  Speech wise he was quite reserved throughout the trip. I can’t really think of any new words he spoke, but that could be that I am writing this at 4 am in a jet-lagged state so am a bit fuzzy. He did perfect his counting and Tess worked really hard with him on this and has him counting with her to ten. But since he has settled back into a normal routine, the new words are starting to come. I know I am still able to reel them off, which hopefully will not be the case later this year, but it is useful to be able to record them here. We can add in “cucumber”, “see you later”, and “ding dong” for the doorbell. He is also doing a heck of a lot of babbling. In those moments the missing plosive sounds of “B” and “D” are making a statement, it is just not in a real word. I think this for me really consolidates the fact he is hearing everything, but it is just a matter of him catching up. He is definitely speaking like a child who has been hearing for 16months, rather than a 2 year old. But I would also say his comprehension is that of a two year old as he certainly understands everything you say. Funnily I picked this up when we where talking to a friend about going home and Harry was on the other side of the room playing happily by himself. He heard that we were saying that we would see them later- he immediately started to pipe up “ Gye Gye, See u “ater”. We were amazed!

He also perfected his preoccupation with pigs whilst away- his mild snort that he used to tell you he wanted to watch Peppa Pig has now turned into quite a hearty version based on listening to Doris the pig who belongs to friends of ours we visited in Suffolk. He whiled away many hours on the airplanes watching episodes of Peppa Pig using the FM system which I hope cut out the noise of the plane and allowed him to focus on the words. I love this show for Harry because in addition to its great humbling humour, the language is very clear- the sentences aren’t long or complicated and so he has a good chance of grasping what is being said. 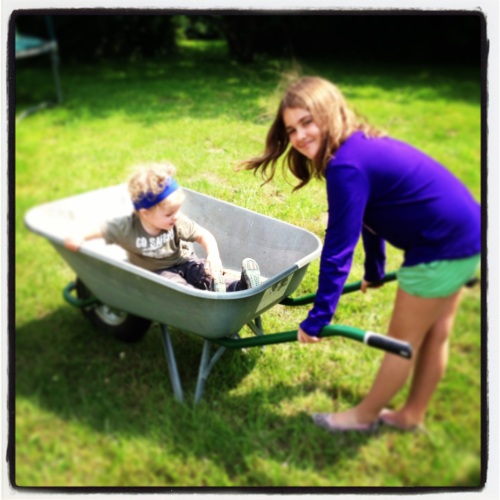 I was able to discuss at great length the pros and cons of I-pad usage for teaching kids with a hearing impairment when I met with my dear old friend Mark in London. He happens to be a Teacher of the Deaf and a Speech Therapist in a school in North England. I hadn’t seen him since Harry was born, but we have spoken via email a few times. It was so amazing to hear what the UK is doing to progressively move their kids forward through the use of I-pads and Apps. I was also blown away by how the services in the UK catered for all the manufacturers of Cochlear implants. In Australia our kids are solely implanted with Cochlear Ltd, in the UK depending on where you are implanted and who is looking after you, you may have a Med-El or Advanced Bionics system. Given the recent burst of advances in technology by the other Brands of CI, I found this fact fascinating. There is no doubt in the end they will all be more or less the same as otherwise they wouldn’t be able to survive as commercial companies in their own right.  In a few weeks our ENT Robert Briggs will be chatting to Dads about the forthcoming technological advances we can expect from Cochlear and Daniel will let you all know via the Blog what he has to say.

All in all it has been a month of steady progress for Harry. He is undoubtedly an inquisitive and brave two-year-old boy, who takes risks and is obsessed with anything that has wheels. He has gained the confidence to walk out in the wide world on his own with out my hand to guide him. He has gained the confidence to say “No”, with an accompanying strong shake of the head when he doesn’t want to do something. He has also started to sign things he needs when without his ears at night. Communication is a combination of various strategies, and Harry is learning the art of mastering the most effective ones to get his needs met. All else falls by the wayside and there is no point forcing it. If is a word is useful to him he will speak it- if not it will stay stored. Can I simplify this by wondering if this is because he is a BOY? 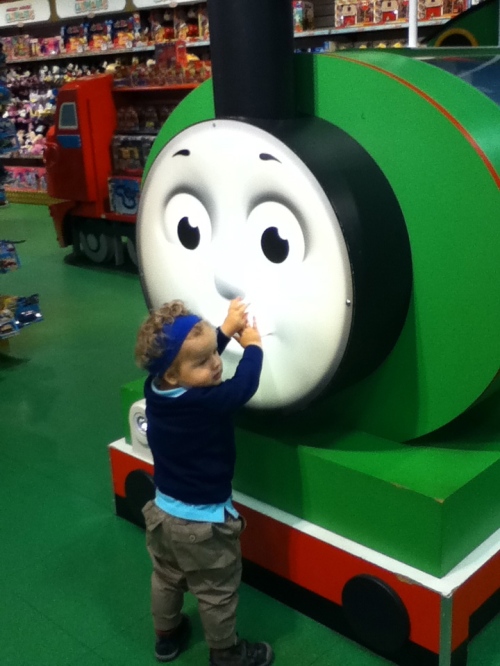