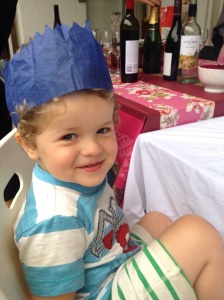 It has been 3 months since I last wrote on the Blog, which is remiss of me.

To make me feel better I will share with you that I have noticed a trend within the Blogs of Parents of Children with Cochlear Implants. And that trend is that once things start to click into place with their child’s speech the outlet of the Blog takes a back seat.

Is it that we no longer need to voice our frustrations and challenges?  Maybe, but they certainly don’t completely disappear with time it is just that we have more tools in our tool box to cope with them , I think .
After a period as a family of a CI kid we enter a world of relative calm and dare I say it “normality” which doesn’t feed the necessity to pour out our heart and soul to the world. Of course I am going to continue to write this Blog as you never know what is around the corner and I am still digging up interesting  experiences as we plod along .

We had an awesome summer. I think the best holiday we have had as a family of five and that would make sense as it was wasn’t the one when we were waiting for Harry to be implanted on our return and it wasn’t the one following his hideous infection last year. It was just normal really- how I remembered Summer holidays when we just had the 2 girls. Dan and I laughed a few times at the long list of “requirements” we had jotted up on the trip this year that will become our bible for booking a family holiday. NO stairs, gates that lock to the street. Door handles high enough for him not to be able to reach and open, shade by the pool for when he can’t go in. And most importantly lots of room to spread out  toy cars and trains.   We also  had grass and playgrounds close by so Harry had options for playing that also met his Occupational Therapy needs. And for Dan there was always a big, well equipped kitchen so he was happy too.

Having Harry walking was a huge advantage on the trip. It meant he was able to be independent inside the houses we stayed in and that meant I could relax ( to an extent) . But as with most 2.5 yr old boys this independence extended to constantly needing to be on the move. When we weren’t enjoying the luxury of the house we had swapped or rented , we were running after him in a High Street nearby where we were attempting to have lunch or dinner or just getting an ice-cream. That boy does not stop moving, it is almost like he is trying to make up for the delay he had in getting onto his feet properly. Thank goodness for those huge stretches of wet sand on the Northern NSW beaches. Endless walking and navigating rock pools was the perfect environment to test Harry’s balance.

We had nearly 4 weeks off together and when we returned and everyone was back in full swing and routine , I took a moment to reflect on how far Harry had come in the last 12 months.

We are nearing the 2nd anniversary of his implant switch on and I have a son who not only hears what we say but is also observant enough to recognise and name many sounds in the environment .

I have stopped counting his words and have replaced that with a record of the number of words in each “sentence”. The constant and detailed review might be obsessive but as parents we are the best advocates for our kids and the more you know the more you can help them.

Swimming for kids with cochlear implants 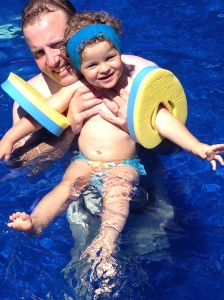 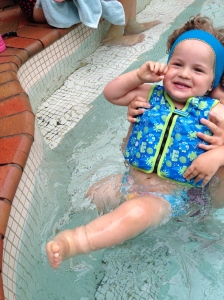 I am sure many of you wonder whether swimming can be on the agenda for Harry at this stage.
Not only does he wear electrical equipment ON his head but he also has grommets inside his inner ear. Neither of these make it impossible for him to swim but they are certainly huge deterrents .