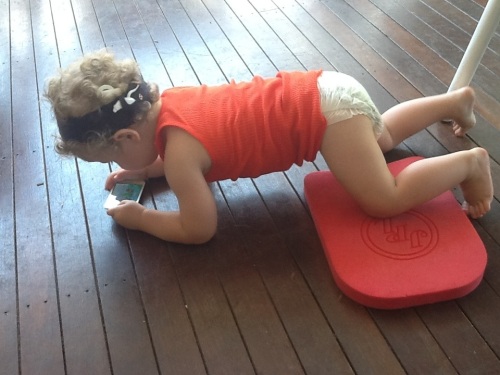 It has been said that between December and February all the hard work from the previous year that you have put into your child’s development starts to bear fruit . Everything they have absorbed throughout the year solidifies and they are able to accomplish their goals and grow.

We are 3/4 of the way through our summer holiday counting down the last week of a lovely break.
My goal was to get Harry walking by the end of the trip and I still have a bit of time to reach it- Just

Without a doubt he is having trouble working out how to balance.

I’ve mentioned it in the past , the ENT specialists do not link deafness and delayed gross motor skill development in children . But there are certainly some kids out there who struggle with balance along with the hearing impairment.

Despite this he is so eager to walk he just grabs a hand.. literally anyone’s , and waddles tilted to the side you are holding and off he goes. If you manage to stop him for a minute and try and get him to stand still and actually stand alone he has no idea. It is similar to watching any of us after a bottle of wine swaying and giggling but not really acknowledging that you aren’t standing up straight or standing!

And so he continues, thinking he can walk and having a ball because it means he can really play with his sisters. He has definitely improved this waddle whilst we’ve been away and if we can just crack the standing unaided he’ll be there. I am sure a few sessions with the Physio when we get home will assist with the solo standing and allow him to walk freely on Melbourne soil.

Speech progress this Summer has certainly moved on- not in leaps and bounds but the words he knows are getting clearer and clearer and some new ones have snuck in. Funny though when I show him pictures of animals he chooses to learn their sounds rather than their names. So we are stuck on Quack for duck and we now have Miaow for cat. His new obsession with Peppa Pig the British cartoon has not managed to increase his animal vocab but I have no doubt in a few weeks he’ll suddenly start saying ” oink oink” promptly followed by “Mr.Bull ” in a cockney accent.

We organised to get Harry an FM system before we left. Not a relic from our 80’s dancing days but a small microphone device that is used to enhance speech in noisy environments. Wirelessly it connects to a monitor with a microphone for you to speak directly into. It is primarily used in classrooms so the teacher can talk directly to the CI user . Whilst the teacher speaks the unit reduces any background noise between the CI wearer and the microphone user. Normally you wouldn’t get one of these units until your child starts school. Harry will be attending pre- school from February for 2 days , so I used to as a reason to request the device. It is made by Phonak and for more detail on this specific device check out their website
www.phonak.com.au and look on the FM system link.

It is an amazing piece of technology as not only does it work in a classroom environment but also with any electronic device with an audio jack. That is, a headphone connection.
So iPhones, iPads, etc can be used without any interference. The sound goes directly into the users head- how phenomenal is that?
I got Alice to download a whole series of Apps on my phone , pop them in a box and name it Harry’s Games (I actually just asked her to see if Fisher Price had any Apps and she did the rest unprompted and unaided) . He now navigates my phone to his box and plays merrily away with various Apps that focus on the alphabet and animals. All these repeat the names of objects and sounds and when the FM system is on he has that going straight into his head with no interference. I am thrilled that my new babysitter is also assisting with is speech development albeit he may end up with an “international accent” ( the toy industry term for a non American accent)
I can also use the FM system in the car with my iPhone to listen to nursery rhymes or anything on my iTunes library. Thank goodness as I was getting a bit fed up repeating Incey Wincey Spider over and over again!

After this discovery I started surfing the Web for other Apps that could assist with speech development. I thought that the Cochlear Ltd website had some listed but I was unable to find them. What I did find though was a site from the States by a Teacher of the Deaf listing her recommended Apps for Kids with a Hearing Impairment.
If you are interested checkout out the Blog
Getting from there to hear Blog by Tina Childress. She has a tab in the main menu ” Apps for IOS devices ” and lists all the relevant Apps there.

So a week left till school resumes and we race closer to the One Year Anniversary of Harry ‘s Switch On. Next Post I will tally up all his words to date and see where we stand one year in.

Tagged as accessories for CI's

One response to “Summertime”