Tomorrow when sound began (for Harry) 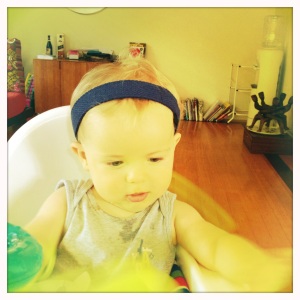 Harry trials his new Joybands in preparing for HHH

This was yesterdays blog, but exhaustion crept in last night and I didn’t manage to post it. Hence the title.

As far I’m aware they are  not recycled sweat bands discarded by Federer when he is unable to win the Aussie Open Tennis title, but stylish and comfortable headwear to assist in keeping the cochlear implants on. Unlike those children and adults wearing them in other parts of the world ( it is a US based family initiative) Harry at least can suggest he is preparing for Australian Open tennis trials in years to come.

We know that one of our major challenges after the wonder and joy of today is going to be keeping the hardware on Harry’s head. A 9 month old baby is all about discovery and pulling and touching everything to put in their mouths. We experienced this with the hearing aids Harry wore for about 4 months. I was once in the health food shop getting  mesmerised by the line up of products, when the owner called out to me “Love, your kid is swallowing something small!” I had no idea what he was talking about as Harry was in the pram and was not able to reach out for anything. But with a swift  hand movement through the mouth I fished out the clear mould of his hearing  aid moments before it became a choking hazard. He had actually pulled the ear piece away from the electronic part of the hearing aid to chew the mould – unbelievable work by little fingers.

I stopped putting the hearing aids on him after that as I wasn’t truly able to watch his every move . I admitted defeat .  I absolutely can’t get defeated by the Cochlear Implants. Today I am sure they will reiterate to us how important it is to keep the CI on at all times he is awake. Every time it is taken off his brain will need to adapt back to silence. A tad confusing . Hence the Joybands and the back up plan –  A BONNET!

2 responses to “Tomorrow when sound began (for Harry)”