The government authority that provides hearing devices is rationing access to technology upgrades because its budget cannot meet unprecedented demand for the latest speech processor.

Harry has just brought home his new N6 processors but not as a result of his Australian Hearing upgrade he should have been eligible for after his N5 processors went out of warranty this month.
Australian Hearing used to provide every child with Cochlear Implants in Australia under 26 yrs a new processor after the processor was 3 years old. This was the period of warranty given by Cochlear Ltd and therefore the Federal Government through their agency Australian Hearing created a policy to ensure each child user had a processor under warranty.
It seems that the increase in technology from the N5 to the N6 was so great that everyone wanted the new processor. Probably the wireless capabilities in the N6 and the new SCAN program( an automatic monitoring of background noise) were features that made it worthwhile to request an upgrade.
Many families were waiting patiently to get their new processors while Australian Hearing was working out how to get around the lack of funds to give everyone out of warranty or who had broken their old processor beyond repair, the new N6. The policy was revealed a fortnight ago and made retrospective, declaring only children under 5 and between 25-26 yrs are now eligible to receive the upgrade after 3 years. Users outside this age group have to apply through their personal private health cover for the new processors.
This is not possible for a majority of families with children who are deaf and require cochlear implants. I understand a group of parents has started lobbying the Govt to reassess the policy and I urge you to contact your Local Govt to do the same. The more voices, the more chance of change. At least the kids going to school should be covered as the new technology used everyday in schools means the old processors will be outdated before too long and those kids will miss out on vital learning.

If you require more information on your child’s eligibility please contact your local cochlear service centre or CIC.

making a splash- hearing in the bath 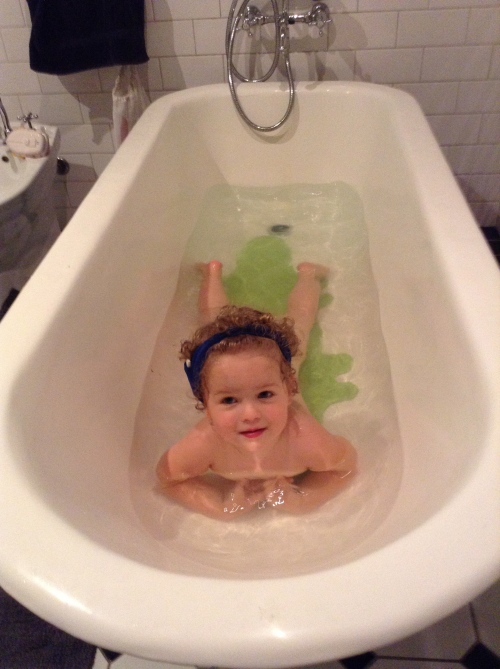 I remember when Harry was first implanted that the Cochlear Implant Clinic made a strong recommendation that the processors should never get wet. A few months ago, probably around the time the Cochlear aqua accessory was launched, they revised their thoughts on this and talked to us about keeping the processors on in the bath as there were many benefits to hearing while bathing. The Nucleus 5 processor was in fact “splash proof” , they said. Well, I was game to try but splash proof I think must relate to sensible, controllable adults rather than excitable under 2-year-old boys hearing the sound of water in the bath for the first time.! They don’t really correlate. At the time I kept them on with my fingers crossed they would stay dry but alas it resulted in non stop splashes that required more than 1 towel to mop up afterwards. With a swift hand, I whipped off Harry’s headband and popped it in the Breeze Dry and Store product we got as part of our kit. To be honest this is the only time I ever use this gadget to dry off the processors after a bit of over zealous water play… The joy of living in Melbourne I am sure it gets used a lot in the North of Australia!

Harry is somewhat older now and

recently I have noticed he is saying “No” quite defiantly if I take his headband off and he is wanting to hear.

I love this so much as it means , hearing is his preferred status

Can I say that?
With this in mind, I have started leaving the headband and gear on for his bath. I draw up a very small bath ( as in not more than a few centimeters deep) in the hope the less water, the less splashing. Yes I am optimistic! But I am also noticing since we have returned from our holiday that he is listening and responding much better to instructions. I now say ” small splashes only please Harry” and demonstrate what I mean by a small splash ( so not the Alice or Tess version). For a short period of time it works and I can keep him playing in the bath with sound. Really this is a revelation as I always thought water play would be a silent activity for Harry. I am yet to purchase ( click here for demo video) Aqua accessory that Cochlear has put out. It seems to me to be a bit cumbersome and the fact you have to use a new one each time to ensure it stays 100% waterproof appears to be an expensive exercise. So ,I think it is time Jane and I put our thinking caps on again and came up with a Bath/swimming design of the headband. It may be one that uses the accessory, I am not sure but we have a few months till summer hits.

As a reader do you ever wonder what would happen if Harry had sore ears?

By that I mean regular ear infections, the stuff kids get all through the early years, especially when they start school. It was something I thought about when I was about to enrol him in swimming lessons for next Term- well “water familiarity” they call it rather than real lessons. He loves the water so much in the bath for me it was a natural progression.

But then this week, poor old Hazza caught a virus off sister #2 and it went straight to his ears. It also went straight to her ears, so the virus didn’t show favouritism towards the CI kid. In this case the ear infection brought with it fluid in the middle ear and according to our ENT specialist it can take a while for the fluid to drain away. So I am putting the pool on hold for now.

What has been a remarkable insight through this whole week of fever and sniffles and visits to GP’s, ENT’s and the like has been Harry’s inability to use his CI’s.

Every time I have tried to put on his headband he has started crying. For sure, his ear area is tender (I get the same response from the digital thermometer being inserted) but I wouldn’t have thought the pressure of the headband would make this worse. I have persevered everyday in case he is ready but we are still not there yet. It was not until we were at the Cochlear Implant Clinic where Harry was checked over by his surgeon that I was told that the

Mapping can sound distorted when there is fluid in the ear and the recipient may not like the way the sound “sounds”.

This week I have experienced 7 days of having a child who has temporarily chosen not to have the wonder of technology to give him access to our loud world. Up until now Harry has been hearing so much that I have almost taken for granted his ability to absorb speech and sound and communicate with us all. We have been learning Auslan for only a few weeks now but can confess we have practised our new skills very little on Harry. This week has really tested me in terms of my ability to attract his attention and let him understand what is going on around him. Learning words in a language is not the same as sentences to give commands and explain or ask things. I have realised that we need to learn short commands and action words to be able to communicate with Harry in Auslan at his age. I have no doubt that once the infection has passed and he is wearing his CI’s again he will be full of new babble and sounds that he has time to process without interruption during this quiet period.