making a splash- hearing in the bath

I remember when Harry was first implanted that the Cochlear Implant Clinic made a strong recommendation that the processors should never get wet. A few months ago, probably around the time the Cochlear aqua accessory was launched, they revised their thoughts on this and talked to us about keeping the processors on in the bath as there were many benefits to hearing while bathing. The Nucleus 5 processor was in fact “splash proof” , they said. Well, I was game to try but splash proof I think must relate to sensible, controllable adults rather than excitable under 2-year-old boys hearing the sound of water in the bath for the first time.! They don’t really correlate. At the time I kept them on with my fingers crossed they would stay dry but alas it resulted in non stop splashes that required more than 1 towel to mop up afterwards. With a swift hand, I whipped off Harry’s headband and popped it in the Breeze Dry and Store product we got as part of our kit. To be honest this is the only time I ever use this gadget to dry off the processors after a bit of over zealous water play… The joy of living in Melbourne I am sure it gets used a lot in the North of Australia!

Harry is somewhat older now and

recently I have noticed he is saying “No” quite defiantly if I take his headband off and he is wanting to hear.

I love this so much as it means , hearing is his preferred status

Can I say that?
With this in mind, I have started leaving the headband and gear on for his bath. I draw up a very small bath ( as in not more than a few centimeters deep) in the hope the less water, the less splashing. Yes I am optimistic! But I am also noticing since we have returned from our holiday that he is listening and responding much better to instructions. I now say ” small splashes only please Harry” and demonstrate what I mean by a small splash ( so not the Alice or Tess version). For a short period of time it works and I can keep him playing in the bath with sound. Really this is a revelation as I always thought water play would be a silent activity for Harry. I am yet to purchase ( click here for demo video) Aqua accessory that Cochlear has put out. It seems to me to be a bit cumbersome and the fact you have to use a new one each time to ensure it stays 100% waterproof appears to be an expensive exercise. So ,I think it is time Jane and I put our thinking caps on again and came up with a Bath/swimming design of the headband. It may be one that uses the accessory, I am not sure but we have a few months till summer hits. 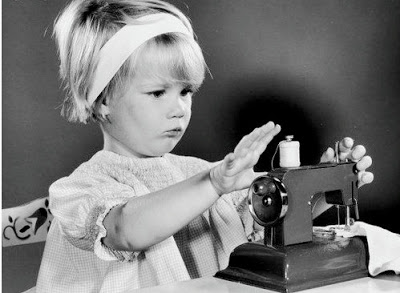 Folks, I am ready to sell Harry’s headbands online.
It has not been an easy task to find someone to make them commercially so other kids can benefit from this great design .
Before I press the button, please let me know if you would pay $25 for one ( plus Postage for delivery) .
I wish we could give them to you at no cost but this is the best I can do to start . 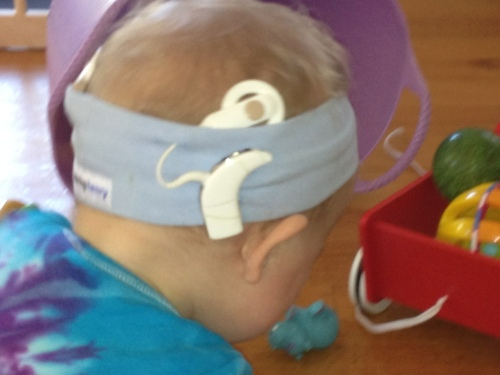 It has been three weeks since Harry was Switched On and we have now had two mapping sessions at the CIC.  Our last session was on Thursday and it was pretty low key.  This is really positive though as the levels they are increasing Harry’s sound to have not changed dramatically since the last session which indicates they are very close to getting an accurate reading of the right levels for his age.

Based on my observations of his reactions and behaviour, the audiologists and speech therapists are thrilled with his progress.  He is turning to sound and in some instances voices.  He is verbalising the entire time he is wearing the implants and his sounds have varied pitch and tone. This all adds up to a strong recognition of sound and gives him a strong start in catching up with his peers in speech.

For me the week has been unbelievably frustrating.  It has tested my patience incredibly and I can only put it down to the magnets.  I have tried so many different permutations of inserting the unit into the Joyband to ensure that the coil does not pull the magnet off.  Currently I have turned the band upside down and inserted the processors through the hole that was the bottom for the battery.  I then place the left processor back to front so it sits further away from the magnet site under his skin.  The left magnet probably falls off every 10 mins at the moment and with the bonnet on his head as well it not always a quick manoeuvre to replace it.  But the bonnet is still required to stop him from grabbing them and pulling them off.

I have had to completely give up on him wearing them in the car as with little to keep him occupied he has plenty of time to work out how to get them off and in his mouth.  They are apparently splash proof  but I am not keen to allow him to work out how much sucking constitutes a splash.

My friend Jane, a talented seamstress and designer, has been churning out new versions of the bonnet for Harry over the last week.   Actually I discovered it is really a pilot’s cap, so sorry Emily Blunt we are streets ahead of you.  For those of you who are interested in the technical details Jane has replaced the string under the neck with a strap and popper button which has stopped the chaffing from the wet ties after each meal.  She has also made the caps in significantly smarter and cooler fabric choices so he can co-ordinate with his outfits. A big thanks to Jane and Miles for being the model.

I have one last ditch at a solution for keeping the CI’s on and saving my sanity.  A website set up by a Sydney mum with a bilaterally profoundly deaf son Henry.  She has called her site Hearing Henry and has made some of her own headbands which allowed her son to get through the first year wearing them constantly.  I was very moved reading her blog as she describes moments I have also experienced.  Big thanks to Maxine in London who sent me the link to Hearing Henry and who obviously has better Internet searching skills than me.

Day 2 was definitely a roller coaster.

After Harry’s first feed of the day I realised that we had neglected to unpack the suitcases and set up all the charging devices.
The implant processor comes with 3 types of battery.
A non rechargeable sort that takes zinc air batteries like a watch, a small rechargeable battery which has 12 hours of normal use, and the large battery which can power the unit for up to 24hrs of ongoing usage.

As Harry is still so young and spends a good chunk of his day sleeping, we only need the smallest one at the moment. The battery is probably the heaviest part of the unit to wear and it helps having only a small battery at this stage.

The remote control unit also has to be charged. This remote is an alarm that lets me know if the magnets have detached themselves from his head…more on that later.
It also allows me to adjust the programs, which in a way is his volume.  Today we did our usual round of swimming lessons for the girls. In the swimming centre watching Alice have her lesson I noticed a huge echo and not any sound absorption, so I dropped down to program 1 to stop him from being freaked out by the sound. It is constant observation.

Observation is a going to be our middle name for the next 12 weeks… Check out the photo – this is the contents of one of the suitcases we brought home, so in effect the accessories for one ear.  Suffice to say we marched straight into the local hardware store for a multi plug thingy. 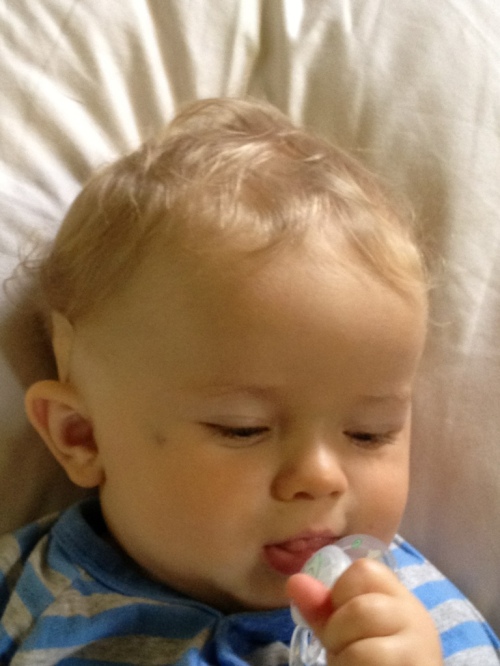